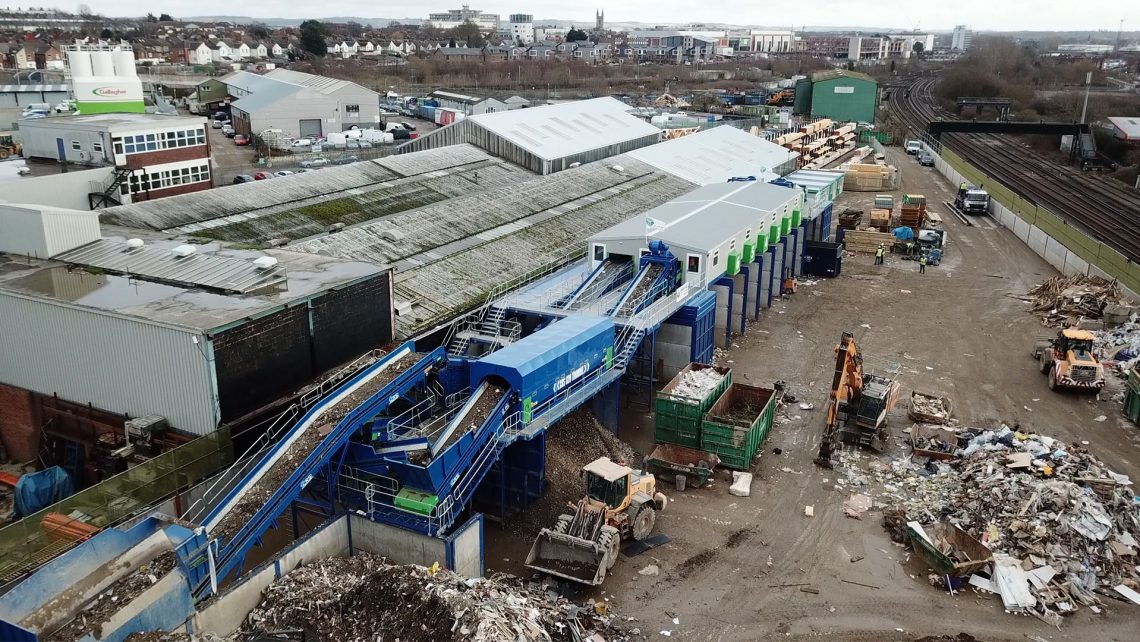 Green Box Recycling Kent Ltd have just increased their processing capacity at their site in Ashford, Kent with the installation of a new recycling system facility and a fines recovery line which has been supplied by Earth Equipment Ltd.

The Ashford site has handled waste since January 2011 with Alan Hogg and Richard Monks as co-Directors.

Alan and Richard are no stranger to waste as they have both previously owned waste transfer sites in Maidstone and have extensive knowledge of the business through waste handling and haulage.

Alan, takes up the story, “Currently we have approximately 20 vehicles and are processing 100-125 skips a day, now with the new CRS system in operation we hope to increase that to 200 skips a day. CRS  have installed a 54-bay picking station and through the commissioning stage we are running on 125 skips a day with 16-18 operatives in the picking station, so we have plenty of room to get the tonnage through the gate which is the reason for installing the new system.”

Alan, continued, “Our old system had one picking line with 4 operatives so the new system is a major step forward.”

The new plant was sourced through CRS dealer Patrick Donnelly of Earth Equipment who has had a long-term business relationship with Alan.

Alan continued, “Together we looked at various systems, many of them much more complex than our final choice but decided to choose a simple straight-line new recycling system which causes less complications, is easy to maintain and operate and is easier for machine drivers to see what is going on the ground i.e: bays empty, bays to be filled etc.”

An investment of £1.5 million:
Alan, commented, “We are receiving an incoming mixed feed of C&D waste and household waste with increased capacity, we are attracting more interest from the large blue-chip waste companies. Everything is running well and it’s a very simple system with motors and drives making maintenance straightforward.

One of the main reasons that Green Box Recycling Kent Ltd chose this system was the 5- metre height of the bays which have a capacity of 40 yards of bulk material and yet still allow an articulated truck to be reversed in when the bay is full. The capacity of the whole plant will eventually mean that there will be no material on-site that hasn’t been sorted.

After processing the waste, the new recycling system produces many end-products – two streams of plastics soft and hard, A, B and C grade woods, paper and cardboard, metal and aluminium and green waste all in separate bays, achieving zero to landfill.

Patrick Donnelly – Director of Earth Equipment, commented, “Alan initially spoke to me in March 2016 as he wanted to see what CRS  could offer so we had an initial meeting and looked at a few concept drawings. Then we went to look at another new recycling system in Milton Keynes that CRS  had completed. It was obvious this was the type of plant he wanted so we based our initial designs on this as a starting point then developed a bespoke design for Green Box Recycling Kent Ltd, incorporating all of their requirements in terms of site size, shape and throughput.”

With the order placed an installation plan was drawn up as the site had to be in constant operation while the new plant was being erected. After the civils were completed in stages, a decision was made on the storage of the new equipment and space allocated for the cranes before the uprights were positioned and the beams installed.

With a seven-week window to complete the new 87-metre long plant the facility was tested with material from mid December to check component synchronisation and then was successfully commissioned during the third week of January 2018.

With the decommissioning of the old system the CRS engineers had around three months of old material to run through the new recycling system and test it, this was duly completed in 9 days. 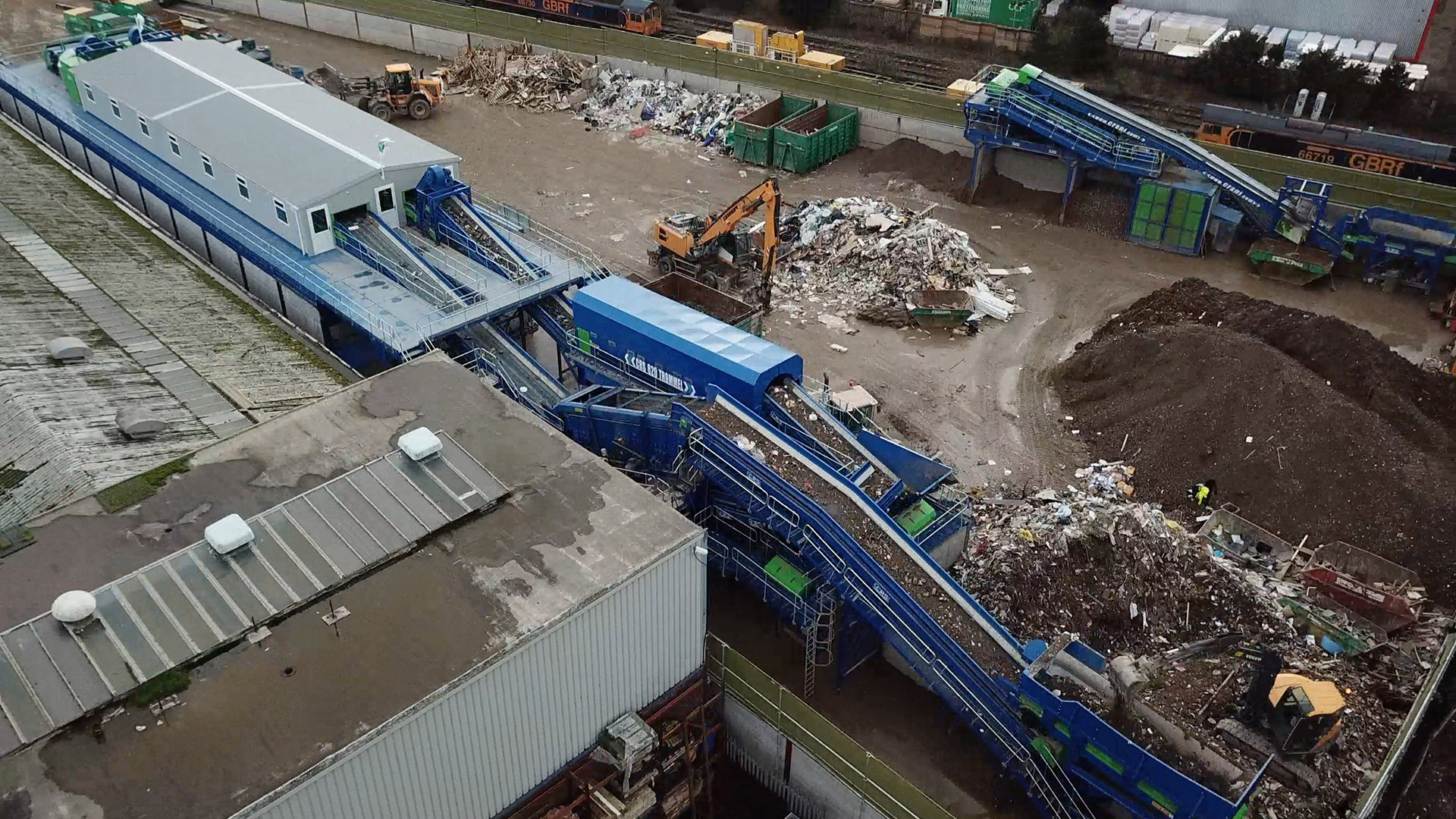 Why Use a Static New Recycling System

The days of a skip being tipped on the ground and numerous labourers crowding around to separate the materials on the ground is a thing of the past, whilst some operators still use this technique it is dangerous practice and a very slow way to carry out this task.  The utilisation of a static recycling plant means that material from a skip is tipped up on the ground, an excavator with grab then drops that material into a large hopper where it is sorted by means of mechanical or manual means presenting it to manual pickers in a safe and measured way.

The general process of a simple static recycling plant includes:-

Feeder – material is fed into a feeder with a grab, the feeder has a variable speed control

Trommel or Screen – the use of either a trommel or a screen depends upon the waste stream and the piece size required, generally C&I (commercial and Industrial) waste is screened with a flat deck screen, whereas C&D (construction & demolition) waste is generally screened through a trommel.

Picking Station – After the material is screened it is then ready to enter the picking station where manual labour is used to separate the recyclable materials, i.e. cardboard, wood, hard plastics, soft plastics etc…

Eddy Current – not a lot of plants utilise eddy currents as they are very expensive, but the eddy current similar to the magnet will separate the non ferrous metal material and drop it into a designated bay

Air Seperation Unit (ASU) – This is generally the last stage of the process, as the material reaches the end of the belt, most recyclables have been picked out, the ASU is a drum separator with an air knife blowing against it.  The drum rotates and can be moved closer, further away, higher or lower depending upon the density of the material to be separated.  The hardcore is too dense so it drops, paper and card is blown against or over the drum, when the card or paper is saturated with water it is more dense, so with the assistance of the movable rotating drum it will travel over the drum and drop in the designated lights bay keeping the hard core clean.

Give us a call or get in contact if you would like to buy, hire, discuss or have a general enquiry about a Jaw Crusher in and around London, Bristol, South Wales, or pretty much the whole South UK.